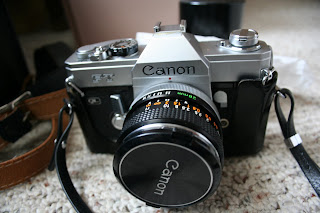 Just the other day as I am walking into Wal-mart to 1. pick up pictures I ordered and uploaded online and 2. drop off a roll of film; I notice the large group of people using the digital centres to upload their photos and have them printed off.
SO many people are using these and wasting halfs of hours standing in line and then waiting several halfs of hours to upload the pictures into the Wal-mart system. (One of these USED to be me; one of these is my mother)
Does anyone even realise the joy of uploading these photos AT HOME while sitting on the couch or even cooking supper? It's true, you can do it. Just go to http://www.walmartphotocentre.ca.
I have been doing it for awhile now. The pictures are ready in LESS than an hour and still cheap.

Another thing I've noticed is the lack of film-users amongst the population. I dropped off my film and it was ready within 15 minutes. I remember the days when the photomachines (film) would be so busy it would take longer than an hour. Sure, some can argue and probably persuade many to believe that film is a waste of money to develop. Okay...not at waste of money; it just costs more. But, 'photographers' now-adays do not even know how much better film is compared to digital. Uh, it pains me to think about it.

While I'm on the topic of new-age photographers, let me remind everyone that you are not a photographer if you buy a SLR camera and edit it. I'll admit even I don't know much about the history of photography, HOWEVER I do know a thing or two about how to use a camera and the functions of each part of a camera.
Photography is the ability to USE the camera and it's features to the best of it's capability in order to produce the BEST QUALITY photo.

Don't call yourself a photographer. please

Commentaires sur Film is back